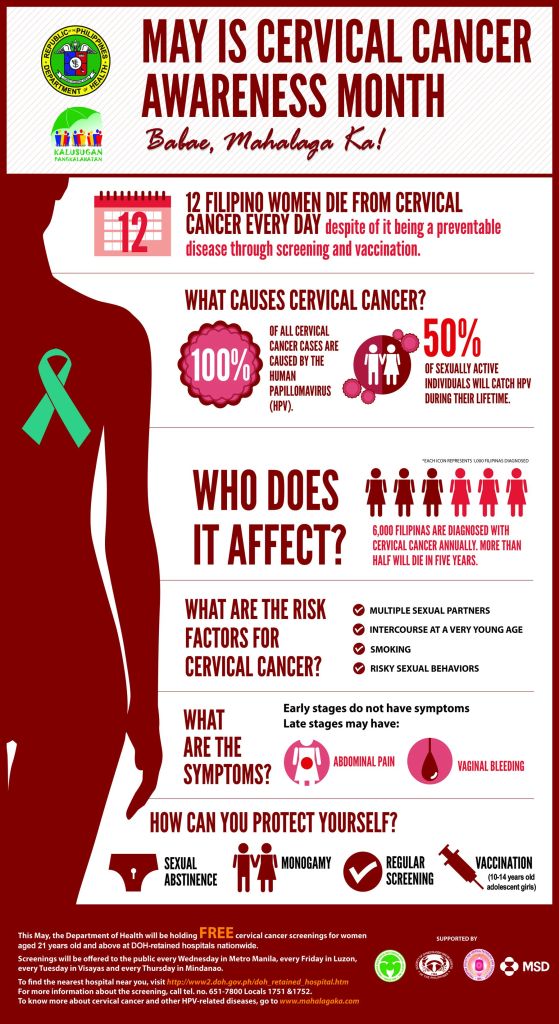 The Department of Health, global pharmaceutical company MSD, along with medical societies all over the country are all-set for the 7th year of the Cervical Cancer Awareness Month celebration this May.

The celebration highlight will be the free cervical cancer screening which will be offered to women 21 years old and above in 58 DOH-retained hospitals nationwide for the whole month of May. Screenings will be offered to the public every Wednesday in Metro Manila, every Friday in Luzon, every Tuesday in Visayas and every Thursday in Mindanao.

In 2013, 56 local government units (LGUs) were also allowed to do the screening. This year, the screening program will be expanded to select LGUs which have been trained for VIA namely Valenzuela, Paranaque, Makati, Marikina, Albay and Surigao Del Sur. According to DOH, screening, either through Pap smear or visual inspection using acetic acid (VIA), should be done on women who are sexually active or had a history of sexual contact.

Studies showed that cervical cancer is the second most common cancer afflicting women worldwide with about 500,000 new cases and approximately 250,000 deaths each year. In the Philippines, an estimated 12 Filipino women die due to cervical cancer each day. This makes cervical cancer control as one of the major priorities of the DOH thru the National Cancer Prevention and Control Program. Several strategies are being done by the program geared towards the prevention of women from developing cervical cancer.

Cervical cancer is caused by the human papillomavirus or HPV which is the most common sexually transmitted infection in both men and women. HPV is highly transmissible and may lead not only to cervical cancer but also cancer of the vulva, vagina, anus, and head and neck cancers as well as genital warts.

In fact, the US Centers for Disease Control and Prevention has stated that HPV is so common that nearly all sexually-active men and women get it at some point in their lives.

But having a HPV vaccination is the means of primary prevention, according to DOH. Vaccination can help protect against cervical cancer and other HPV-related diseases in both men and women. Secondary prevention through regular screening which is every one to three years can help detect cervical cancer in its early stage and increases the chances of survival.

For a complete list of participating hospitals, visit http://www2.doh.gov.ph/doh_retained_hospital.htm and to learn more about cervical cancer and other HPV-related diseases, go to http://www.mahalagaka.com