Fans of Korean American K-Pop sensation Jessica Jung will be glad to hear that she will be holding her first fan meeting in Manila on 25 November 2016 at Plenary Hall, Philippine International Convention Center (PICC).

More about the Fan Meet after the jump

END_OF_DOCUMENT_TOKEN_TO_BE_REPLACED

Their comeback concert this year will kick off on October 22 in Singapore. Presented by Concert Republic, A1’s “Here We Come-Back!” Tour in Manila will be held at the Kia Theater in Araneta Center, Quezon City on October 23 and the IEC Pavilion in Cebu City on October 25, shows start 8 p.m.

Ticket prices and more after the jump END_OF_DOCUMENT_TOKEN_TO_BE_REPLACED

Due to logistical travel issues beyond their control, the recently announced two-night concert in Manila of 80’s super group Culture Club will now be forced to limit their visit to a “one night only” special event. Boy George and Culture Club will be performing for the first time in Manila on June 18, Saturday, at the Araneta Coliseum.

For those who’ve purchased tickets to the June 17 (Friday) show, they can refund their tickets or replace them with tickets for June 18.

As promised, Boy George and the original lineup of Culture Club will give their audience a night of unforgettable music and partying. The group will be performing all their hits like Karma Chameleon, War Is Stupid Do You Really Want To Hurt Me, Miss Me Blind, Move Away, Love is Love, and a lot more.

To make things more exciting for the Manila leg concert, one hundred pieces of special VIP tickets worth P25,000 each will be on sale. Aside from enjoying the concert, ticket buyers get a privilege to attend a ‘meet and greet’ event and have their photo taken with Culture Club on June 16, 3PM at Novotel Manila, Araneta Center. They will also receive a double disc of Culture Club’s greatest hits album and a commemorative concert T-shirt. Tickets for the ‘meet and greet’ event will be available (cash basis payment) on June 10 (Friday), 7pm to 11pm, at Greenfield District’s Kaleidoscope event area which will have a special Boy George and Culture Club night and sing-and-look alike contest. END_OF_DOCUMENT_TOKEN_TO_BE_REPLACED 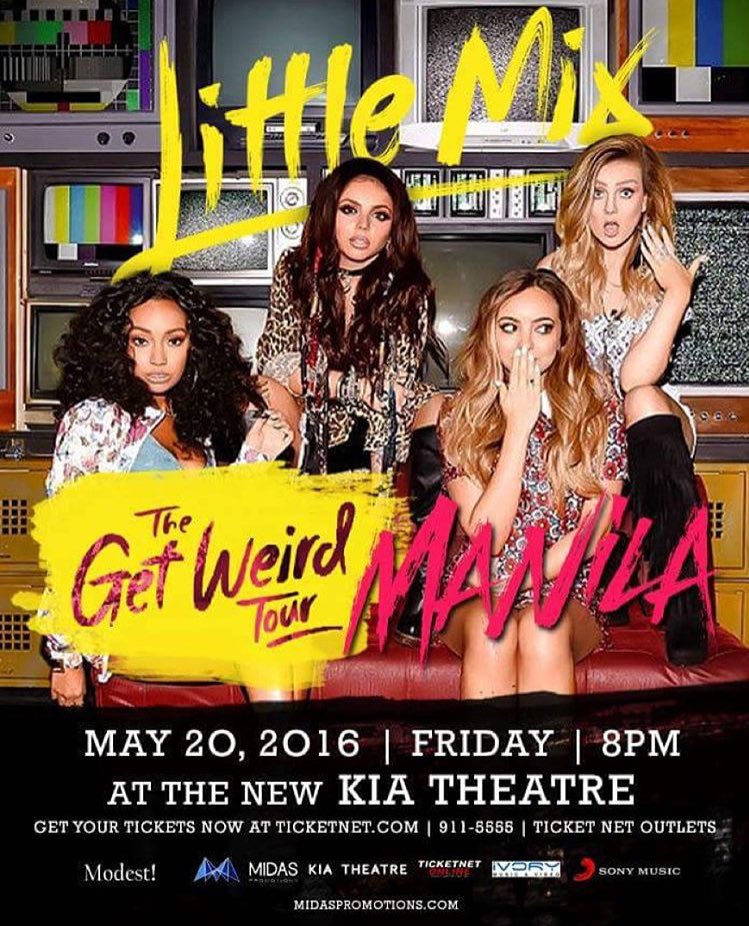 LITTLE MIX Live in Manila on May 20, 2016, 8pm at Kia Theatre, Araneta Center. Little Mix The Get Weird Tour Manila is presented by Midas Promotions. … Tickets now available at Ticketnet Outlets or via TicketNet.com.ph / call +63 911 5555

Catch Nate Ruess live as he brings all the inspiration and music of Grand Romantic to his Filipino fans. Tickets on-sale at TicketNet.com.ph or call 911-5555 or 374-9999.