Film Development Council of the Philippines (FDCP) will celebrate the triumphs of the Filipino filmmakers by hosting the FDCP Film Ambassadors’ Night on February 9, 2018 at Sampaguita Gardens, Quezon City.

This is to give recognition to the Filipino filmmakers who brought honor to the country by winning in various international film festivals last 2017.

Aside from the citations, FDCP will also name the A-Lister winners from the top international film festivals, as well as the Camera Obscura awardees, the highest Artistic Excellence Award given by the Agency for outstanding members of the film industry. Previous recipients of the Award include Directors Brillante Mendoza and Lav Diaz, and actors Jaclyn Jose, Allen Dizon, and Teri Malvar.

This event will also serve as a venue for fellowship and an opportunity for the filmmakers and industry movers to meet again and build a creative ground for future projects and collaboration.

The following are the names of the Film Ambassadors who will be recognized that night:

4.       DO I HAVE BOOBS NOW? directed by Joella Cabalu and Milena Salazar,

7.       Tale of the Lost Boys directed by Joselito Altarejos

22.   ACROSS THE CRESCENT MOON, written and directed by Baby Nebrida

With only days to go, the Film Development Council of the Philippines is geared and ready for the Pista ng Pelikulang Pilipino (PPP), a one-week exclusive screening of Filipino films from August 16-22, 2017 in all cinemas nationwide. This fiesta-themed celebration of Filipino films features a diverse set of quality genre films which audiences nationwide may choose from.

“We are very proud of this incredible roster of films that we are showcasing for Pista. As this is the first time that we are partnering with all the theaters for massive event for the whole country, we hope that we get the support of all Filipinos by watching the films,” said FDCP Chairperson Liza Diño during the Grand Press Conference held last August 3, 2017 at SEDA Vertis North. Quezon City in partnership with Globe.  “This is not just a film showing event, but really a celebration of films that are distinctly ours and which we can connect and identify with. We are glad that we have the support and advocacy partnership with Globe for their anti-piracy campaign to make PPP more meaningful,” she added. END_OF_DOCUMENT_TOKEN_TO_BE_REPLACED

Globe Telecom partners with the Film Development Council of the Philippines (FDCP) through Pista ng Pelikulang Pilipino (PPP) for its #PlayItRight advocacy in a bid to encourage the public to play content from legitimate sources as well as provide an opportunity for local movies and film-makers to grow their business and expand to more audiences.

By bannering PPP, one of the biggest Filipino film festivals that hero homegrown talent, Globe is also able to show its support to the Philippine movie industry.  PPP has the largest number of screenings for films nationwide with 790 theaters showcasing 12 top-rated locally-produced movies chosen by the FDCP. END_OF_DOCUMENT_TOKEN_TO_BE_REPLACED

100 TULA PARA KAY STELLA (Jason Paul Laxamana)
Fidel and his crushie Stella go through college together and we watch as he struggles to confess his feelings for her.

ANG MANANANGGAL SA UNIT 23B (Prime Cruz)
“Ang Manananggal Sa Unit 23B” is a love story… but with a creature from Philippine folklore. Ryza Cenon of “Ika-6 Na Utos” plays the titular character who has to keep emotions at bay or risk transforming into a winged creature.

AWOL (Enzo Williams)
Lt. Abel Ibarra goes after the man who tried to kill him and his family.

BAR BOYS (Kip Oebanda)
Rocco Nacino, Enzo Pineda, Carlo Aquino and Kean Cipriano star as four law students and the sacrifices they make as they inch closer to their dream of passing the bar and becoming lawyers.

BIRDSHOT (Mikhail Red)
After unintentionally shooting a Philippine Eagle, Maya is forced to flee and hide in a forest — where violence and other threats lurk in the dark.

PAGLIPAY (Zig Dulay)
An Aeta crosses the river to go to town and find a wife. On the way he meets a woman who grew up in the city and the encounter creates a lasting impact.

PAUWI NA (Paolo Villaluna)
A sickly man, his nagging wife, a blind and pregnant woman, “Jesus Chirst”, and a dog ride a pedicab out of Manila to find greener pastures in the province. “Pauwi Na (Pedicab)” was awarded Best Film at the Shanghai Film Festival.

SALVAGE (Sherad Anthony Sanchez)
A news crew reporting on alleged mythical creatures in Mindanao are chased by an armed groups into the forest.

STAR NA SI VAN DAMME STALLONE (Randolph Longjas)
A child with Down Syndrome dreams of being a star, prompting his struggling family to hustle some more and help turn his dreams into a reality.

TRIPTIKO (Miguel Franco Michelena)
A three-panel film that unearths the mysterious happenings in the lives of a playboy who runs out of luck, a model whose skin-deep curse reaches a boiling point, and a musician chasing after light-footed love

Film ASEAN started as an FDCP program during the chairmanship of Briccio Santos but is now operating as a private organization. The Council has clarified that there are no ties between it and the Film ASEAN and that any agreements entered into by the organization are illegal and have no effect.

“FDCP is the sole agency that is empowered by law to enter into agreements with local and foreign agencies on matters relating to film or the cinematic arts, and the Film ASEAN is in no way connected to the Council,” said Liza Diño, Chairperson and CEO of the FDCP.

“If the public is aware of any Film ASEAN transactions relating to FDCP, please let us know as soon as possible,” she added.

In honor and celebration of the strides and victories of Filipino films in the past year, the Film Development Council of the Philippines (FDCP) will host the Film Ambassadors Night at the end of the month at the FDCP Cinematheque Manila Open Grounds, Kalaw, Manila.

Dubbed as an evening of thanksgiving and appreciation, the Film Ambassadors Night will recognize the award-winning filmmakers of 2016 who have continued the proud tradition of Philippine cinema and have brought not only prestige to the country but also raised the level of awareness to the craft and art of filmmaking.

Among the recipients of the FDCP Film Ambassador Award include Jun Robles Lana and Paolo Ballesteros for their work in Die Beautiful. Brillante Mendoza, Director of Ma Rosa, Philippines’ entry to the Oscar 2016, will be receiving the FDCP Artistic Excellence Award. END_OF_DOCUMENT_TOKEN_TO_BE_REPLACED 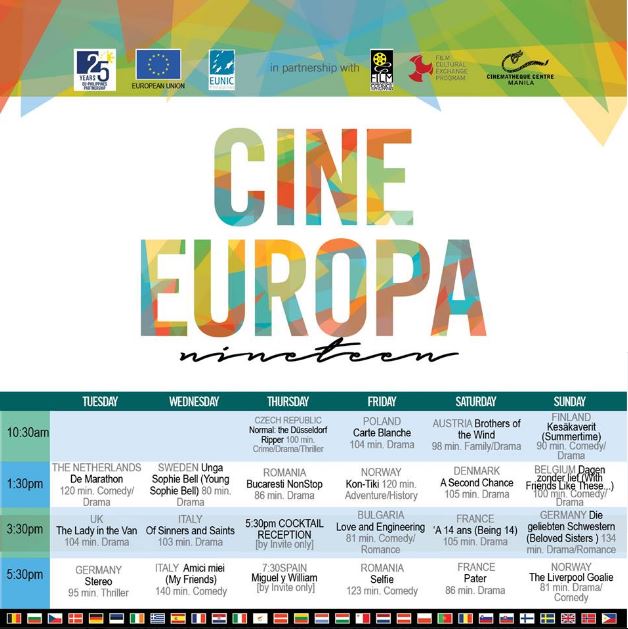 The Cine Europa Film Festival is back with its last run of 2016 this December at the Film Development Council of the Philippines (FDCP) Cinematheque Centre Manila, with the festival presented to us by the European Union (EU) Delegation to the Philippines and its member states, in partnership with the FDCP through its Film Cultural Exchange Program, and other cultural organizations.

Boasting 19 years and being one of the longest and largest local film festivals, the Cine Europa celebrates 25 years of the EU Delegation in the Philippines with the theme of “Friendship” to highlight years of cross-continental partnership and collaboration as well as the quality filmmaking cinema from all over Europe. Also in celebration of this friendship, a by-invitation only gala for delegates of the European Union as well as special guests of the FDCP will be conducted during the festival run on December 8, 5 pm, before the private screening of Inés París’s Miguel Y William at 7:30 pm.

The 19th Cine Europa films screening at the Cinematheque Manila are: END_OF_DOCUMENT_TOKEN_TO_BE_REPLACED

The Film Development Council of the Philippines (FDCP) joins our local industry in mourning the passing of famous character actor Dick Israel, who passed away in their Makati home last Tuesday evening, the 11th of October, at the age of 68.

Co-Actor Vivian Velez who had worked with Israel in previous projects and was a member of Damay Kamay Foundation, an organization that helped entertainment industry workers in need, confirmed Israel’s passing in an interview, having been informed by Israel’s son Essex that his father passed at 8 p.m. on Tuesday. Two weeks prior Israel’s wife Marlyn had suffered an aneurysm and was taken to the hospital, where she still lies in a coma.

The FDCP sends their condolences to Israel’s family and prayers for the recovery of his wife through these difficult times.

More about the Actor after the jump
END_OF_DOCUMENT_TOKEN_TO_BE_REPLACED

Screenings for National Indigenous People’s Month at the FDCP Cinematheque Centre Manila this October 12th to 14th have a P100 admission, except for the screening of Bontoc Eulogy, which is offered for free. The Q&A session for Flor Chantal Eco’s curated “Land, Life, and Struggle” on October 13, 7 pm is also for free. Tickets are released an hour before the screening time, on a first-come, first-serve basis, only at the Cinematheque Manila.

More about the featured films after the jump END_OF_DOCUMENT_TOKEN_TO_BE_REPLACED